It’s all about tone. Your tone.

After a lot of customer requests Dr.Tube has opened the Custom Shop. In the Dr.Tube Custom Shop high-end tube guitar amps are built to customer specs.

Excellent tone is the primary drive in the Dr.Tube Custom Shop amps. Every detail has been specifically designed to improve the tone. This may seem very obvious but my daily experience in repairing and modding amplifiers has shown that this is not at all the the case in almost all guitar amplifiers currently on the market today. Most manufacturers strive for the lowest price of production instead of good tone.

Another request was to construct smaller and lighter amps. Not everybody likes to lug around a heavy 100W modified Super Lead any­more, which is already way too loud at a volume setting of just 1.

Dr.Tube has developed a 2 channel amplifier concept which is very versatile. The power stage can be con­structed with either two or four EL84, 6V6, EL34 / KT77 / 6CA7 or 6L6GC / 5881 / 7027 tubes. For amps with 50W or less a GZ34 or 5U4G rectifier can be used, and for amps of 20W or less an EZ81 or 5Y3 rectifier can be used. If so desired the rectification can be made switchable between the tube rectifier or (fast-recovery soft-recovey) silicon diodes with the standby switch.

For the preamp really a lot is possible as long as it fits in 12 knobs/controls.

A couple of amplifiers are shown on this page which give an impression of the possibilities. 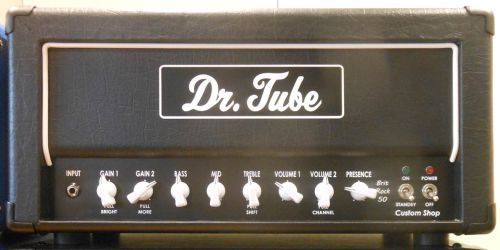 Dr.Tube has built a simple 1½ channel amplifier in which both channels use the same tone controls (thus the name 1½ channel). The “Plexi” Clean channel hosts an excellent Crunch, very well suited for all rhythm guitars, but can also be used very well in a clean setting. This channel reacts very well to the volume control of the guitar, cleaning up very nicely when turning the volume down. The Overdrive channel offers a very nice Lead/Solo tone. There is a big overlap between the two channels which really increases the versatility of this amp. The Gain control of the Overdrive channel incorperates a Pull More function which hot rods the gain some more and brings this channel into van Halen territory. The Treble control has a Pull Shift funcion which scoops the tone somewhat. A Pull Fat on the Bass control and a Pull Bright on the Plexi Gain control are also often requested features. Both channels can ofcourse be selected with a footswitch. 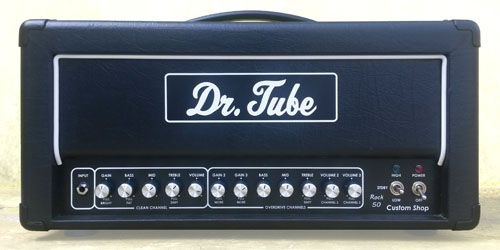 For guitar players that want more control and pos­sibilities a 2½ channel version has been con­structed in which both channels have their own tone controls. The Overdrive chan­nel has been split into two sub channels witch one shared tone control section (thus the 2½ channel designation) so that a good Solo Boost is available. In this amp too, both Overdrive Gain controls have the Pull More function which hot rods the gain some more and brings this channel into van Halen territory. Both Treble controls have a Pull Shift funcion which scoops the tone somewhat. A Pull Fat on the Bass controls and a Pull Bright on the Plexi Gain control are also often requested features. All channels can ofcourse be selected with a footswitch.

The speaker outputs are without an impedance selector switch, which can (and does) “suck” tone. The 4 ohm ands 8 ohm outputs are double parallel jacks and the 16 ohm output is a single jack, so there is no need to daisy chain your speaker cabinets. Each cabinet can be connected with its own cable.

A very transparent serial FX Loop is also possible, which can also be switched in and out with a footswitch. This FX Loop circuit has been developed here in house after having tested a lot of commercial alternatives which all performed disapointingly.

A real 3 channel Custom Shop amp is also in the pipe line, but as that requires a new and deeper chassis this is still in development.

Bass players have also requested a Custom Shop amp! Soon more on this…